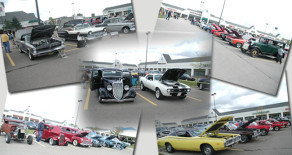 The 2009 show was a great success! It was held October 10, 2009 at the Tanger Outlet Center and there was over 75 cars/trucks that participated. We were able to raise almost $6000 for the Livingston County Salvation Army. Thank you to everyone who was involved. Mark your 2010 calendars for the second Saturday in October for next year’s Great Pumpkin Car Show. We plan to make our third annual show an even bigger and better event!