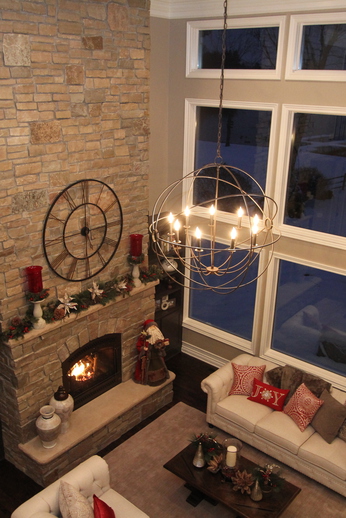 Howell, MI May 2016—The National Association of the Remodeling Industry (NARI) named Paulson’s Construction, Inc. in Howell, MI 2016 East Central Regional Contractor of the Year (CotY) in the Residential Interior category of its annual awards competition.
Contractors from seven regions around the country vie for CotY Awards each year. Judging is based on problem solving, functionality, aesthetics, craftsmanship, innovation, degree of difficulty by an impartial panel of industry experts. NARI named 158 Regional CotYTM winners (with 22 partner team members) from the 2016 competition. Regional winners were honored and National winners were announced at NARI’s Evening of ExcellenceSM reception in Austin, TX.


Paulson’s project encompassed the entire interior of a large lake-front home. Much of the work centered on the kitchen and gathering area opening up the space, improving traffic flow, storage, work space, and lighting. Additionally, six bathrooms were remodeled, including a total gutting of the master bath. The butler’s pantry, mudroom and laundry room were completely redone and three fireplaces were rebuilt. Hardwood floors throughout the home were refinished and new carpet was installed. The grand staircase was refinished complete with new rails. Electrical work including new fixtures and painting throughout completed the project.

Paulson's has been serving the greater Livingston County area since 1996 performing all types of home improvements and residential remodeling. This is their 5th Regional Contractor of the Year award; in 2012 they won a National award for one of their projects. "We are honored to have our project recognized by a national organization such as NARI," says Mr. Paul McClorey, president of Paulson’s Construction, “and also very proud of the exceptional craftsmanship of this project.” Paulson’s can be reached at 517-545-8651 or via their website at www.PaulsonsConstruction.com.

About NARI: The National Association of the Remodeling Industry (NARI) is the premier association of remodeling professionals and industry experts dedicated to advancing the professionalism of the remodeling industry and educating the public on the benefits of using a qualified professional. NARI members follow a strict code of ethics with high standards of honesty, integrity and responsibility. For more information, contact NARI at 847-298-9200 or www.nari.org